Photo Guide to Northeastern US Silvopasture

A current interest of our lab and others at UNH are silvopasture systems: the simultaneous production of livestock, trees and forages on a plot of land.

We wanted to share that a new photo guide depicting silvopasture systems in the Northeast is available. Joseph Orefice and co-authors have assembled a "...photographic resource for farmers, foresters, and extension professionals to utilize when considering silvopasture practices in the region."

Joseph is an Assistant Professor at Paul Smith's College and the owner of North Branch Farm. He received his PhD from UNH where he studied silvopasture systems, and is currently collaborating on silvopasture research with UNH. The photoguide is based on their previously published research, which contains more details on the project.
Posted by Knawel Mugwort at 12:37 PM No comments:

Congratulations to Lesley Atwood and the other participants of UNH's inaugural 3 Minute Thesis Challenge. Lesley’s talk was awarded both First Place and the People's Choice Award. Click here to see her and the other winners in action.
3MT competitions started at the University of Queensland and challenge graduate students to present their research to a lay audience within 3 minutes using one un-animated slide. If you want to learn more about the 3MT competition check out the University of Queensland 3MT website.
Posted by Knawel Mugwort at 9:10 AM No comments:

More information and the announcement can be found here.
Posted by Knawel Mugwort at 2:28 PM No comments:

The UNH Agroecology Lab welcomes a new member to our group: Carolyn Lowry. Carolyn is here on a Postdoctoral Fellowship from the National Institute of Food and Agriculture, and will be studying how soil spatial heterogeneity and root foraging influence crop and weed competition.

Carolyn is originally from coastal New Jersey, and received her Bachelor’s in Biology at the University of Delaware, where her experience with undergraduate research sparked her desire to become a scientist. Carolyn’s interest in agroecology began while working at the Small Farm Unit at the Center for Environmental Farming Systems (CEFS) in North Carolina. The Small Farm Unit is an educational demonstration farm, where students, farmers, educators, and others can come to learn about sustainable agriculture principles and practices. At CEFS, Carolyn gained experience with common production practices used on an organic diverse vegetable farm, but became especially interested in reduced tillage practices, and developing strategies to make reduced tillage work for organic production systems.

Carolyn received her PhD in 2015 working with Daniel Brainard in the Sustainable Vegetable Systems Lab at Michigan State University. As part of the Brainard Lab, Carolyn’s research focused on strip-tillage, which is when tillage is confined to a narrow strip directly in-line with the future crop row, and the between row area is left undisturbed. Strip-tillage retains some of the benefits of no-till (e.g. improved infiltration and water holding capacity) while providing some of the benefits of tillage to the crop row (e.g. improved seedbed and incorporation of plant residues). Carolyn’s research examined strip-tillage effects on nitrogen cycling and weed competition in a cover-crop based organic system. Additionally, Carolyn examined using strip-intercropping of cereal rye and hairy vetch cover crops to improve N availability and crop productivity within an organic strip-tilled vegetable system.

When Carolyn is not working she enjoys being outdoors... including hiking, skiing, and running. However, Carolyn is most interested in traveling and experiencing new cultures and places. Her interest in travel has taken her on many unique and exciting adventures, from learning to scuba dive in the Galapagos Islands, all the way to standing on the very bridge where Archduke Ferdinand was assassinated in Sarajevo (the shot heard round the world that started the First World War). More recently, Carolyn spent six months conducting research in the state of Bihar, located in Eastern India on a USAID Borlaug Fellowship.
Posted by Knawel Mugwort at 10:05 AM No comments:

Jennifer Wilhelm has recently co-authored "Farm, Fish, & Food Enterprise Viability in New Hampshire" as part of her work with the New Hampshire Food Alliance. "The Viability Initiative outlines challenges and opportunities for farmers, fishermen, and food entrepreneurs, and describes how the NH Food Alliance will collaborate within a network structure to support food enterprises and promote a growing, healthy food system that benefits all residents in New Hampshire."

A pdf of the full document document is available.
Posted by Knawel Mugwort at 2:38 PM No comments:

‘Tis the season for Conferences

Lesley Atwood presented work from her Pesticide Seed Treatment experiment at both national meetings. She was invited to speak in the Systems Approach to Agroecology organized by Drs. Randa Jabbour (U. Wyoming) and Mary Barbercheck (Penn State). Lesley’s talk “Disrupting the network? Assessing the impacts of pesticide seed treatments on multi-trophic interactions in the soil system” included field data which suggests pesticide seed treatments can unintentionally and adversely affect non-targeted populations of the soil microbial, soil invertebrate, and weed seedbank communities. Lesley also presented some of her Pesticide Seed Treatment data at the Ecological Society of America meeting: Effects of pesticide seed treatments on soil food webs in agroecosystems (COS 57-6). 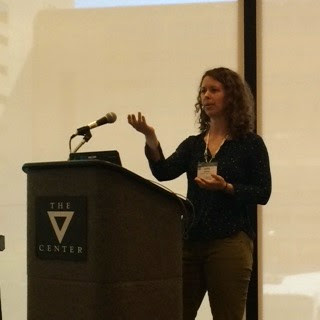 Nick Warren and Sam Werner along with Liz Hogdon (UVM) presented a poster at ESA: Weed community assembly in cover crops: What is the relative importance of niche processes? PS 43-40, outlining some of Liz’s work with cover crops while at UNH as a Master’s student.

We really enjoyed our time in Baltimore and Minneapolis. It was especially nice to learn about other agroecological work and to meet others in the agroecological community. Posted by Knawel Mugwort at 11:11 AM No comments:

Together with PSU's David Mortensen and BYU's Roger Koide our lab has been investigating the unintended or "indirect" effects of treating crop seeds with pesticides. This recent publication outlines how pretreating corn and soy seeds with insecticide and fungicides, may actually have an important impact on the weeds in the seedbank.

One of the Agroecology Lab's recent papers was summarized on EurekAlert!, an AAAS site for science news: "Living mulch, organic fertilizer tested on broccoli".

The press release was distributed by the publishing journal HortScience (American Society for Horticultural Science) and is also available on their website.


Posted by Knawel Mugwort at 9:10 AM No comments:

Our group is happy to announce two recent publications:.

We grew several cover crops species individually and together in mixture, and we discuss how cover crops may influence the composition of the weed community (their potential to "biologically filter" certain weed species). For more info, the abstract can be found here. Or contact us, if you are unable to access the full-text.

Effects of Living Mulch and Fertilizer on the Performance of Broccoli in Plasticulture.
HortScience 2015. 50(2):218-224.

Here we present the results of establishing a living mulch in a broccoli production system. December's post has a short write up about the field experiment, or please visit HortScience for more details.
Posted by Knawel Mugwort at 1:15 PM No comments:

Agroecologists are interested in food production systems that resemble natural systems in important ways. For example, natural systems are often species diverse – forests, meadows, lakes, and oceans can have many different species living within one community. Generally, our agricultural practices don’t look like these communities, favoring monocultures instead. Growing our food in diversified fields can be challenging, especially given that conventional monocropping has led to high yields, low weed pressure, and relatively easy harvesting.


Despite the challenges, there are many benefits to diversification that are important for long term health and stability of our agricultural land. Rotating crops diversifies species over time and has been recognized as an important method of keeping soils productive and disease pressure down. Diversity can also occur in space, such as with intercropping (planting more than one species together at the same time). However, this method in particular has the potential to lower cash crop yields if the species used compete with each other for resources.

Our lab “diversified” a broccoli field by intercropping the broccoli with a cover crop. The cover crop in this case is called a living mulch, because it is grown between the broccoli rows and one of its functions is to keep weeds down, similar to other types of mulches. Past research has shown there is a tendency for living mulches to have a variable effect on yields, and understanding why, or even how to prevent yield loss, is an important step in making this a viable option for growers.

To see if we could optimize this diversified system, that is, to create a scenario in which competition does not reduce yields, we grew broccoli with or without a living mulch, and with different amounts of fertilizer. We expected that some amount of fertility would cancel out any competitive effects from the living mulch, and then we could decide if that much fertilizer was an acceptable investment.


Well, we don’t know for sure, but we have some ideas. We don’t think that competition for water is the problem because the broccoli was irrigated. We also don’t think that the living mulch competed with broccoli for light because it was occasionally mowed. It’s possible that despite high levels of fertilization, the living mulch could still compete with broccoli for nutrients. There are environmental circumstances where the roots of the living mulch can grow aggressively to find nutrients, and this was certainly a possibility, especially in the second year when yields were lower.

Interestingly, some plants react to the presence of neighbors by detecting and responding to the ratio of red to far-red light. A nearby plant (or living mulch), reflects a different light signature than say, the bare ground does. We may be observing the broccoli’s response to this light signal, which is ultimately expressed through lower yields.

The take-away is that efforts to diversify agricultural systems remain important, and we should continue to work on methods that balance short and long-term productivity. Living mulches have a lot of potential, and under some circumstances they have been successfully used without negative yield consequences. Understanding why and when they compete with crops will be important information in order to make them a more useful tool to growers.

The results of this study will be appearing soon in HortScience (in press).

Posted by Knawel Mugwort at 10:01 AM No comments: